A Refugee camp was established on Blackheath in the summer of 1709, when thousands of  people fled from war and crop failure in the Palatine states (now Germany). Lured by the Crown's promise of free land in British America, they travelled in small boats down the Rhine to Rotterdam  and crossed the Channel to seek refuge in England. 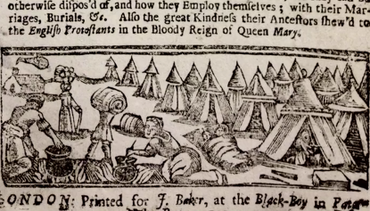 The Palatine refugee camp on Blackheath in 1709

The arrival of the Palatine refugees sparked a familiar political debate as to whether the refugees would benefit the economy or as critics said  “take the bread out of the mouths of our people”. By the end of the year some had been resettled in English towns, but the majority were shipped to settlements in rural Ireland and in North America.
Two hundred years later in 1914, 250,000 refugees who fled the German invasion of Belgium received a warmer welcome. Parish council minutes reflected the national response, offering support in the shape of funds, food and clothing. The Ascension Scout group switched from fundraising for next year's camp to support the refugees. Later in the war, St John's Hospital on Blackheath Rise treated Belgian and British soldiers amongst many war-wounded.

Britain had an obligation to help refugees during the war but the narrative quickly changed when it ended. The government didn't want foreigners anymore.       Professor Tony Kushner, University of Southampton

For the past 25 years, the Ascension has been part of Lewisham Churches for Asylum Seekers (LewCAS) which welcomes and supports refugees and asylum seekers. This is through practical action, such as the weekly foodbank. 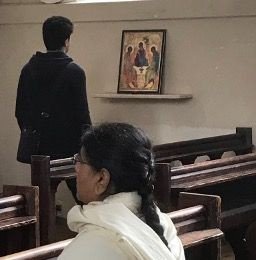 ESOL class members on a recent visit to the Ascension

Since the days of Paul Oestreicher, vicar of this parish and Chair of Amnesty International, this church has supported Amnesty and their work for human rights. Each year we are proud to offer our church to Amnesty for their booksale.
Our Vicar is also a supporter of Reprieve, the charity that works with prisoners on death row.
Sometimes human rights work is controversial, for example when Paul Oestreicher visited the imprisoned Baader-Meinhof terrorists to investigate alleged abuses in their captivity in Germany. It is the essence of human rights that they apply to every human being.
The Universal Declaration of Human Rights was agreed by the United Nations in 1948 as a common standard for all nations. International human rights law protects people against the excesses of individual governments. In Europe these rights are upheld by the European Court of Human Rights.

THESE ARE YOUR HUMAN RIGHTS