The 1960s was a time of radical change and throwing off old constraints. This affected the church as much as wider society. Religion was no longer an essential and established part of society. In the Roman Catholic Church the Second Vatican Council established new and sweeping changes, but reform was not confined to the Roman Catholic church. In the Church of England this was galvanised by the publication of a little book called Honest to God, written by John Robinson, the Bishop of Woolwich. 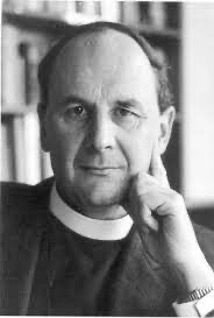 Reading Honest to God today, it’s hard to see what all the fuss was about. Robinson rejected the already outdated views of God as ‘up there’, replacing them with the idea of God as transcendent, as the depth, or ground, of being. Really it represents a generational shift, from people brought up on unquestioning faith to a faith based in debate and reason. Robinson suggested that ethics might be situational, that moral decisions could be influenced by the circumstances in which they were made. In reality this had always been the case – nobody expected people to live in strict accordance with the full laws of Moses – but many people felt they were on shifting sands at a time when they sought certainty.

John Robinson, and the Bishop of Southwark, Mervyn Stockwood, together spearheaded the movement which became known as South Bank Religion. Characterised by a focus on social justice and progressive theology, this led to more media exposure and controversy than the Church of England had seen for many years. Despite being a small church, the Ascension was a key voice in the South Bank Religion movement. Under Paul Oestreicher this church championed the rights of women, the anti-apartheid movement and the human rights movement. 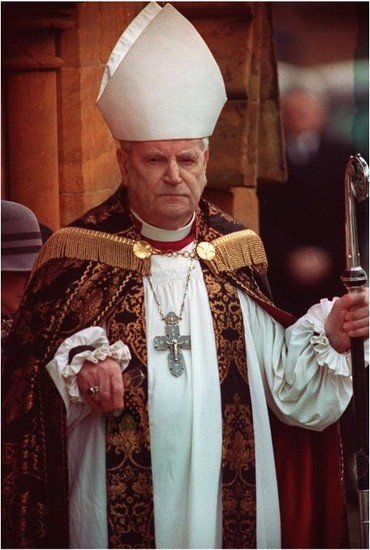 Despite being a small church, the Ascension was a key voice in the South Bank Religion movement. Under Paul Oestreicher this church championed the rights of women, the anti-apartheid movement and the human rights movement. 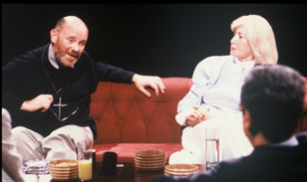 Paul Oestreicher on After Dark, 1997

Today the South Bank Religion movement has a controversial legacy. Some people regard it as a creeping utilitarian secularisation of the church, and others as a progressive movement that helped open up the church to new ideas.

The name 'South Bank Religion' implicitly linked
the modernist architecture of the South Bank
with modern philosophy and theology.

Though progressive, the South Bank Religion movement was flawed in that it was too focused on the voices of the white, privileged elite of the day, though Paul Oestreicher’s experience as a refugee offered a valuable alternative background. Today we consciously seek to hear more diverse voices. Our liturgy includes work by feminist liturgists such as Janet Morley, and we recently invited the Reverend Lindiwe Maseko to speak about Ubuntu Theology during our recent Study Day.

The use of inclusive language in worship remains contested, especially the masculinisation of God. The need for tradition, familiarity and consistency with past ages conflicts with the need for equality and diversity. We are actively exploring how to develop a truly inclusive spirituality at the Church of the Ascension.