Diversity and the history of the Ascension

The history of the Church of the Ascension is linked to the history going on in our area. The national struggles with racism were mirrored locally, with anti-racism and anti-apartheid campaigning an active part of the church's life. Paul Oestreicher tells the story of when the church was picketed by the far-right National Front:

The Quaye family was a family which lived in this parish. The father was a railway worker originally from Ghana and their two daughters were black. They had, for no valid reasons, got on the wrong side of the Greenwich Police. A racist detective so harassed them, that one by one, they had a police record and had seen the inside of the police cells. It was so blatantly racist that we could not let the matter rest. A good lawyer was put on the case and saw to it that the father was exonerated and the detective disciplined. The Sunday Times published the story, whereupon the National Front, the extreme Right of the 1970s, staged a Sunday morning demonstration at our Church.

Controversies continue today as the church nationally examines its own contested history and faces up to institutional racism. In 2020 the Archbishop of Canterbury, Justin Welby, stated that there was ‘no doubt’ that the Church of England was ‘deeply institutionally racist’. He set up an Anti-Racism Taskforce  to make recommendations for immediate action and carry out preparatory work to set up the Archbishops’ Commission to address racism.
A BBC Panorama programme in 2021 aired reports of institutional racism within the church, and there is still work to be done within the church. At a local level, we hope to challenge racism and humbly acknowledge the faults of the past. The Diocese of Southwark has created its own anti-racism charter.

The Black Lives Matter movement brought clashes within the church, with some people regarding it as overly politicised and others an essential response to institutionalised brutality and racism. When Donald Trump posed in front of a church in Washington D.C. holding a bible and refusing to acknowledge the righteous protests at the death of George Floyd, the Ascension posted this notice on the front of the church: 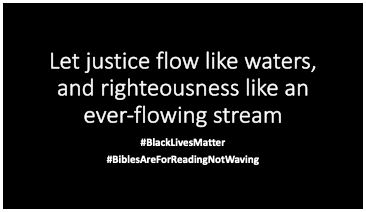 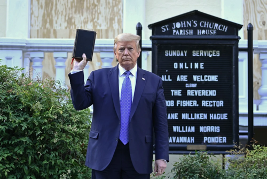 The inclusion of LGBTQIA+ people and their rights not just to be part of the worshipping community, but to be affirmed in ministry, have long been a part of the Ascension. One of our longest-standing congregation, the Reverend Martin Preston, was a founder member of the Gay Christian Movement which evolved into the Lesbian and Gay Christian Movement and is today known as One Body One Faith. Martin was a brilliant schoolmaster, musician, and polymath. He was Head of Religious Education at St Dunstan’s College in Catford.
The magazine Private Eye ‘outed’ Martin in an article in 1981 while he was working at St Dunstan’s. Pupils from the school wrote to support their respected teacher, but the headmaster was less forgiving. Martin was not sacked, but he was told he must not publicly discuss his sexuality. 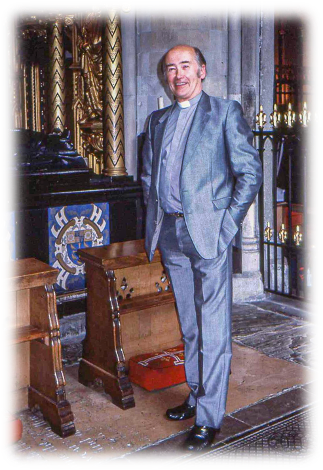 The Reverend Martin Preston (1931-2020)
Assistant Curate at the Ascension

Martin died in 2020, but the story of his experience of having to hide his sexuality at St Dunstans took on new power when Nicholas Hewlett, the current Headteacher of the College decided to “come out”. During LGBT History week in 2021 he decided to speak about his own life with a male partner, in order to help students feel more comfortable, and to empower them to be themselves.
Referring to Martin’s experience he said “Pupils rallied around their teacher; they had letters published in his support, going against cultural norms, and showed great humanity, respect and dignity.”

The Church of the Ascension continues to affirm the worship and ministry of LGBTQIA+ people in all our services. Once a month we host Open Table, a celebration of Holy Communion that affirms and celebrates the ministry of LGBTQIA+ people and offers a safe space for people to explore their faith, especially those who have been hurt or excluded by other churches. Our Vicar is a Trustee of the Open Table Network and we  support the Campaign for Marriage Equality. 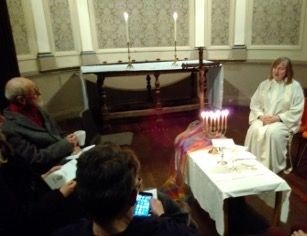 The Reverend Jide Macaulay spoke at a recent Study Day hosted by the Ascension and Open Table South London. In 2006, Reverend Jide started House of Rainbow as a weekly gathering for LGBTIQ+ Christians in Lagos, which the media soon described as 'Nigeria's First Gay Church'. Intimidation and death-threats followed, and Jide returned to the UK to develop House of Rainbow as a global organisation.  We are proud to have welcomed Jide to speak at the Ascension.

Women have always taken leading roles at the Ascension, long before their contribution was recognised by the national church. The Ascension was founded as Dartmouth Chapel in 1697, by Susannah Grahme, but it would be another three centuries before women were ordained to the priesthood in the church of England. The women of Blackheath were not silent during those three centuries. They have protested exclusion and injustice within and outside the church.

Rosa May Billinghurst, a wheelchair user after childhood polio, was well-known for her presence on demonstrations and her militant actions. She was imprisoned for criminal damage to a postbox in Blackheath.  The Billinghurst family supported their daughter and provided sanctuary for suffragettes released on bail at their home in Oakcroft Road. A brass plaque commemorating her father Henry Billinghurst as a “faithful parishioner” is on the south wall of the church. 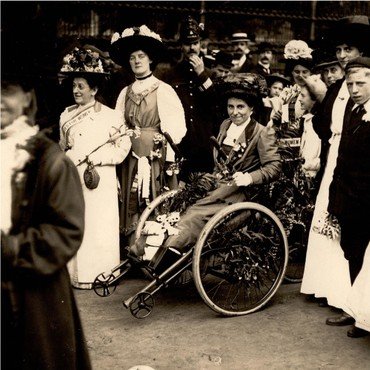 There are many more connections between the Suffragette movement and Blackheath, with prominent feminists and suffragettes living locally such as Dame Millicent Fawcett. Suffragette Emily Wilding Davison was born in Vanbrugh Park in Blackheath. A militant activist, she was imprisoned and force fed several times. Her protest actions included setting fire to postboxes, hiding in Parliament overnight and arson. Davison suffered fatal injuries when she ran in front of the King's horse at the Derby. 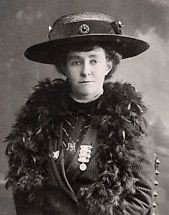 Charles Escreet, Vicar at the Ascension,  was one of the officiants at Davison’s funeral, where over five thousand women marched in support of women’s suffrage. The procession at Davison’s funeral was banned by the police, but numbers were such that they could not stop it going ahead.

In another event a hundred years later, with some historical parallels, police tried to prevent a vigil for Sarah Everard, a woman murdered by a police officer, from going ahead on Clapham Common. Again, the event went ahead because of the sheer numbers of people who turned up, including at least one member of the Ascension congregation. Many people were angry that COVID restrictions were being used against women, but not against the football fans who had gathered in the city only days before.

Police line up in front of the vigil for Sarah Everard

From 1914, when many men were called away to fight, the minutes of the Ascension church council reveal an increase in the number of women active on behalf of the church, raising funds and working in the Mission House located on the Lethbridge estate. Women ran the savings and social clubs and visited families in their homes. The voice of protest was muted during the war, and it was not until 1928 that women could vote on equal terms with men.

The Church of the Ascension was the first parish church to formally ask for a member of the church to be ordained priest. Deaconess Elsie Baker’s name was put forward by the Church after a debate at the Annual Meeting in 1975. Rev. Elsie was one of the first women ordained to the priesthood in the Church of England, and though she was too old to lead her own parish, her contribution to this parish and to the wider church is inestimable. 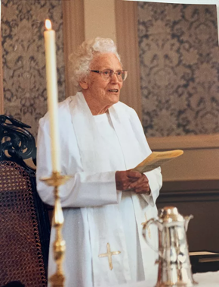 Mr Albert Grosse was one of the churchwardens of the Ascension who petitioned the Bishop of Southwark for Elsie’s ordination, making church history as they did so.

Elsie Baker was one of the women who trained at the Greyladies College for Women Workers in Dartmouth Row. The College was for women who acted as pastoral workers in South London, a kind of early unpaid social work. 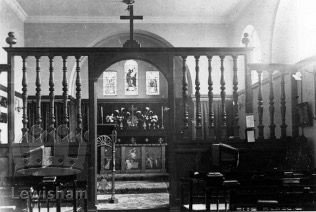 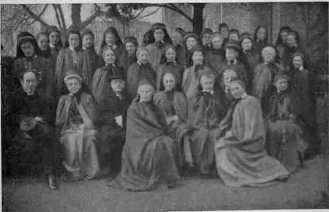 It is noticeable how resonant of the Ascension is the architecture of Greyladies chapel (now demolished).

Greyladies students were firmly under the control of the church establishment. Male clergy took on the roles of President, Warden and Treasurer, though they did appoint a ‘Lady Head’.

‘The college is…a society of ladies living together for the purpose of helping in the work of the Church of England under the incumbents of the diocese. The bishop of the diocese has ultimate control over all its affairs.’

A worker must have herself well in hand. She must be healthy-minded and sensible with regard to food, rest, and recreation, and unfailingly hopeful. She must be content to work on quietly from day to day without looking for or expecting praise for what she does.                 Everywoman’s Encyclopaedia, 1912

It was only in the 21st century that this church had a female vicar, though women have now held several senior roles in this church.

Today the Church of the Ascension stands in the tradition of inclusion, being a member of Inclusive Church and continuing to campaign for equality and human rights.